The DD@S project believes in the strength of dialogue to tackle intolerance and discrimination at school to stimulate inclusive education all over Europe. Therefore, this project contributes in the professional development of teachers to acquire effective dialogue skills to cope with ethnic, religious and multicultural conflict situations at school.

A gamification based online training in democratic dialogue, a toolkit with tools and good practices including content managed system and guide to help teacher teams in developing their own specific training cases, teacher modules and a guide for implementation and policy recommendations will be organized and implemented to tackle this challenge.
Learn more about our project HERE 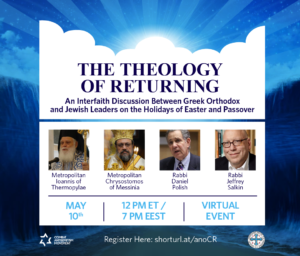 Combat Antisemitism Movement (CAM) and Interorthodox Centre of the Church of Greece co-hosted an interfaith Zoom dialogue featuring a panel of Greek Orthodox and Jewish clergy discussing the theology of “returning,” as it relates to the holidays of Easter and Passover.

The Christian and Jewish communities both emphasize the “return” to religious practice and celebrate emancipation on Easter and Passover, albeit through different beliefs and customs.

The panel participants discussed this, as well as the connections between Easter and Passover and Pentecost and Shavuot.

A full recording of the event can be viewed here:

Ms. Kalliopi Mavragka and Mr. Sergios Voilas – scientific team of the Interorthodox Centre of the Church of Greece participed in the Executive program “Faith-Based Leadership in a Turbulent World” May 2-6, 2022 organized by The Fletcher School – Tufts University and the Foreign Affairs Institute of Athens.
The aims of the project were to integrate the organic knowledge and teachings of the Orthodox faith with contemporary applied and technical skills for leadership in a complex local, international, and transnational environment. This gathering represented an opportunity to reflect on the complexity of faith-based leadership in today’s global context, to learn from experts and peers while exploring our own journey and goals as leaders.
Also a Special Reception was given in honor of the participants in the “Faith-Based Leadership in a Turbulent World” program which was hosted by the U.S. Embassy in Athens at the American School of Classical Studies, Athens.